Tovarishchi! After six amazing, incredible, and ultimately beautifully heartbreaking seasons, The Americans is done. There is so much richness in this show, and we want to take one last look at it all. To do so, we have our roundtable friends Kathleen (aka alternakat), Barb, Roland, & Chris to join the fun! We reflect on the series, compare the pilot to the finale, and discuss everything from favorite characters and scenes to best disguises and wigs of all time!

Even though The Americans is over, we would still love to hear your thoughts so please send them to us! You can email text or audio feedback to watchingtheamericans@gmail.com or signal us (we have replaced the operator!) at 919-907-0542. Follow us on Twitter @WatchAmericans. Please check out our Facebook page Watching The Americans. And if you do enjoy the show, kindly rate us or better yet rate and review us in iTunes!

As we move on, there may be more content to share like reviews of a series dvd or blu-ray set, special events, or even interviews to share. And when we find our new venture, we will announce on our social media and in our feed so stay subscribed to Watching the Americans!

The Americans, our collective passion for 6 years, has finally come to an end. And what an ending! No one dies, yet everyone suffers mightily. A fitting conclusion to one of the best television shows in the modern era! Of course we could go on and on about S06E10 “START”, which aired on May 30, 2018. It was written by showrunners Joel Fields and Joe Weisberg and directed by Chris Long.

This is Episode 127 and contains the news and our episode breakdown and analysis. To hear our history, tech of yesteryear, and feedback segments stay tuned for Episodes 128 and 129.

We have so many news items we could share, yet three really stood out. First up is Variety with a compelling oral history of the show. Next is The New Yorker’s recap of the finale that found it elegant, potent, and unforgettable. Finally Vulture breaks down the blistering vulnerability of finale’s garage scene.

Then we pick right up from the end of last week. Philip and Elizabeth meet and go to get Paige. Meanwhile, Stan continues following his suspicions about them and ends up confronting the three of them in a garage near Paige’s place. After one of the most tense and wrenching scenes of the series, Stan lets them go. As they leave, Philip tells Stan that Renee may be a fellow Soviet spy. Dennis breaks Father Andrei. Philip and Elizabeth decide to leave Henry in the United States and ask Stan to take care of him. After an awkward farewell call to Henry, the Jennings trio don new disguises to flee to Canada on their way back to the USSR. Just before crossing the border, US Border Patrol agents fail to stop them. Seemingly past the danger, Elizabeth then Philip both see that Paige has left the train and them. With nowhere to go, Paige returns to Claudia’s empty apartment for a shot of vodka. Stan visits Henry and reveals the truth of his family. Philip and Elizabeth fly to Europe and then drive to the Soviet border. Arkady meets them and drives them to Moscow, where they get out and look at the Moscow River at night. Philip tells Elizabeth “feels strange” and she replies in Russian “we’ll get used to it.”

Remember that we do love to hear your thoughts about The Americans so please keep sending them in! You can email text or audio feedback to watchingtheamericans@gmail.com or signal us (we have replaced the operator!) at 919-907-0542. Follow us on Twitter @WatchAmericans. Please like us on our Facebook page Watching The Americans. And if you do enjoy the show, kindly rate us or better yet rate and review us in iTunes! 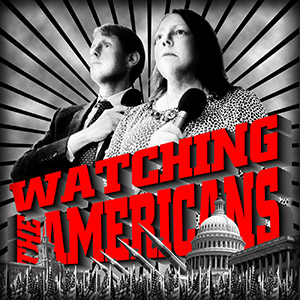 Send in Your Feedback